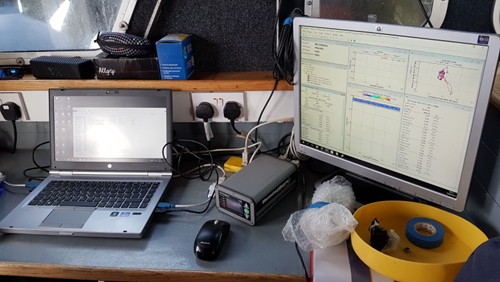 An Acoustic Doppler Current Profiler (ADCP) is a hydroacoustic current meter that measures water current velocities over a depth range using the Doppler effect of sound waves scattered back from particles within the water column. The vessel mounted ADCPs can be used as an alternative to deploying a fixed ADCP frame which requires more licensing. The VMADCPs can be used to capture currents at static locations or across different locations at regular intervals across the tidal cycle. The data from this can then be used to calibrate hydrodynamic models and deliver a better understanding of current activity in the area. This is gathered alongside water quality data, including water sampling and water profiles of temperature, salinity and conductivity.

A recent survey we conducted was in Fenit Harbour, Tralee. The aim of the project was to capture current data alongside water quality profiles and sampling to provide a greater understanding of effluent dispersal in coastal areas. The sampling was conducted over a 13hour period to capture an entire tidal cycle. It involved roaming between three sites sampling at regular intervals and was carried out by our field team marine scientists.

Leaders in the provision of Robust, Reliable and Secure Marine Data

Great annual MRIA dinner tonight, the sector is growing and buzzing about our amazing natural resource and the value of this resource. We are proud to be part of this sector providing metocean data where it counts.

"This is about decarbonising our entire economy... by using this awesome, infinite resource off our coastline" - Minister Simon Coveney at MRIA dinner tonight

Our colleague @PeterCoogan6 is being conferred with a First Class honors Masters Degree in #UCDDublin next week. His Thesis on the use of #earth_observation and #machine_learning to measure #waves. Well done from all of us! @Marineireland @WindEnergyIRL @Entirl @ESA_EO

Final preparations complete for #SeaChange22 #ArchConf22, looking forward to the great lineup over the next 2 days including talks from @CHERISHproj and @followtheboats! We’ll have a stand all weekend for any #metocean queries. @GeolSurvIrl @dlrcc @Dept_ECC

Philip Trickett out Technical Director has been in #Aberdeen for the last 2 days with @Entirl meeting with the Scottish Offshore Wind sector, as well as catching up with the Irish supply chain with @Exceedence @alphamarine_ie @TfiMarine @GDGeosolutions

Our CTO @philtrick is off to #Aberdeen with the @EI_TheUK #offshorewind delegation. Why not meet with him to discuss your #metocean monitoring requirements. @SeagreenWind @fugro @PortofAberdeen